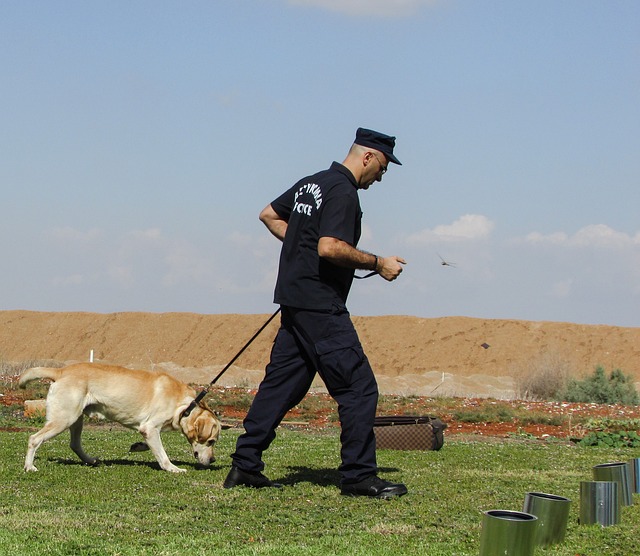 Large Bulldogs and Mastiff-type were guards and attack dogs in the armies of the Romans, Egyptians, Persians, Greeks, and Britons. During the Middle Ages, Bloodhounds hunted down outlaws. A Newfoundland traveled with Lewis and Clark on their expedition across America.

World War II dogs did all the above and more. They worked as scouts, joining soldiers on patrol, and alerting them to enemy soldiers nearby. Japanese canines guarded warehouses. German dogs guarded prison camps. American, patriots donated their pets for military service.

In 1859 Belgium officers first used dogs on street patrols, an example soon followed by the Germans, French, Austrians, and Hungarians. There were no formal training programs. Pups were selected to be fearless, aggressive, and intimidating. They protected their handlers, guarded evidence, and apprehended criminals. By 1910 Germany had dogs working in 600 cities.

The United Kingdom followed the trend. Constables were authorized to take their own K-9s on patrol in 1914. A few years earlier in 1908, the Northern Eastern Railway was deploying Airedales as guard dogs to prevent theft. Police Dog Training

In the United States, local police departments were slow to recognize the benefits. The 1970s saw the introduction of dogs. Today they work in every city, and many rural locales. Often they’re protected with ballistic vests. Laws make it a felony to injure or kill a law enforcement K-9. More than 300 Search and Rescue animals aided the rescue efforts after the September 11 terrorist attack on the World Trade Center.

Europe is the breeder and trainer of choice. A two-year program of obedience, agility and endurance training narrows the field to the best, who then proceed to specialty instruction. To make the cut, a dog must be obedient, trustworthy, intelligent, forceful, and strong.

Police K-9s are well-trained and socialized, not vicious. They live with their handlers’ families. They chase and hold onto a person when commanded to do so. It’s a well-rehearsed game that brings a reward. Police dog training sessions scheduled twice a month keep their skills sharp.